UPDATE: Note – the first version of this article incorrectly stated the cooling rate of the Oscar 15’s x-ray tube and has since been updated.

With Flat Detector c-arms becoming all the rage these days and both GE OEC and Genoray releasing new c-arm models within the last year we thought it was time to put together a comparison of how these two systems compare to one another.

Both units are fantastic machines and come loaded with the most current technology available such as large oversized displays, increased resolution, CMOS flat detectors, USB storage, DICOM 3.0 and much more but they do differ from each other in certain ways so let’s get into those.

First and foremost and the number one thing c-arm buyers look at is the Flat Detector size. The GE OEC Elite CFD offers two different detector sizes: a 21×21 CM (8.27×8.27 IN) version and a larger 31×31 CM (12.2×12.2 IN). This follows in line with GE traditionally offering both 9″ and 12″ image intensifiers on their older 9900, 9800, and 9600 c-arm models. The Genoray Oscar 15 by comparison only offers a 26×26 CM (10.2×10.2 IN) version which puts it right in the middle of the two offerings from GE. How this translates to you the c-arm buyer depends on procedures being performed and how much field of view you want and need. For example, if you’re using your system for Pain Management and traditionally used a 9″ II system, GE’s 8.27″ might not be big enough for you now and you might prefer the extra field of view from a 10.2″ model. However if your performing Vascular work the 10.2″ might not be enough field of view for you and you might prefer GE’s larger option with 12.2″. This really comes down to individual user preference. One thing unique about the flat detectors versus the older II systems is that they are not nearly as bulky and the physical size doesn’t interfere with procedures as much as say an older 12″ II did with overscan, so going larger won’t encumber you like previously.

The whole point of a flat detector system is to get better image quality. Image quality on c-arms is made up of image resolution and power of the x-ray system to make the image (which we will touch on next). For the GE Elite CFD c-arm it gets a 500-pixel bump from the older 9900 model to an image resolution of 1.5 K by 1.5k or 1.5-megapixel resolution. The Genoray, however, outpaces this with full 1,000 pixels over the CFD and 1,500 pixels over the older 9900 c-arm with specs at 2.5k by 2.5k or 2.5-megapixel resolution making it the highest resolution system on the market. This is due to the Genoray Oscar 15‘s Image Matrix which contain 2,600px x 2,560px out of its CMOS detector. By comparison GE’s CMOS detector has a image matrix of only 1,536px x 1496px on the 21cm model or 1,548px x 1,524px on the larger 31cm model. This gives the Genoray a much larger pixel density overall compared to either GE model and higher image resolution. 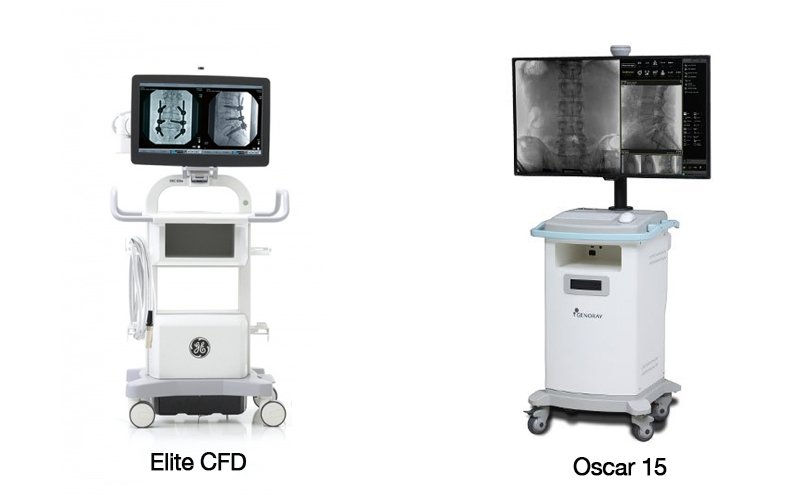 Both units use an updated style of monitor carts with large oversize flat panel displays. The GE OEC Elite CFD has an optional 32″ 4k UHD display with articulating arm and the Genoray has a 43″ 4K UHD stationary display. Both are very large with excellent brightness and contrast, but the Genoray wins out with its larger display unless your needs require an articulating monitor arm.

Both monitor carts also include all the new tech you would want on them such as CD/DVD burners, DICOM 3.0 ports, and USB ports for a verity of image storage and handling options.

Both systems are loaded with the typical software you have come to expect on a new c-arm. GE started the Anatomic presets back on the 9900 model, and has continued it on the Elite CDF c-arm as well, but the Genoray Oscar 15 c-arm has them as well. Both c-arm systems have features like pulsed fluoro, low dose mode, snap shot, ABC (automatic brightness control), motion detection, metal correction, automatic collimation, and more. Both c-arms also optionally offer Vascular packages which contain DSA (Digital Subtraction), Road Mapping and CINE, with the expectation CINE comes standard on the base level software package as well.

The GE OEC Elite CFD comes standard with a 1-year parts and labor warranty, which is pretty standard in the industry. The Genoray, however, comes with a 5-year parts warranty and 1 year labor, making it the best in the industry. This gives it tremendous value when you factor in service contracts on the Elite CFD, and makes the cost of ownership on the Oscar 15 an all-around better value.

Pricing. This is where things get really interesting. The Elite CFD starts in the high 100k range as its a premium over the standard GE OEC Elite and the 9900. The Genoray Oscar 15, however, is in the low 100k range and is priced similar to a new 9900 ESP system. This makes it the lowest cost Flat Detector system on the market. So not only does it have the best warranty, but its also one of the lowest costs. Genoray is being very aggressive in the marketplace and is showing that it wants to be taken seriously.

In conclusion, I would have to give the Genoray Oscar 15 the win. Between meeting the Elite CFD on most specs or being better on important things like image resolution, warranty, and price I just think its an overall better value. The only reason I see buying an Elite CFD would be if you needed the additional field of view or if your facility is a “GE Facility” where your service contract would benefit by also having the c-arm under it. Otherwise, the cost savings on the Genoray is way too great to ignore, as is the higher image resolution.

If your interested in learning more about the Genoray Oscar 15 please give us a call at 833-838-8382 or fill out the REQUEST A QUOTE form and we would be happy to get you over more information including pricing.

About the Author: Kris Derentz

Kris is a Medical Equipment Specialist and has been working with Physicians, Practice Administers and C-Level Healthcare Executives since 1997. His specialities include Surgical C-Arms and various other surgical equipment.